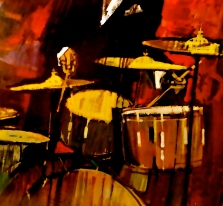 Hulaboom is an ongoing-series of original studio releases and instrument design experiments begun in 2014. Each track begins as an improvisation on a ‘hybridized’ (electroacoustic) drum kit, through which a variety of signal processes, samples and gated ‘ghost tracks’ are activated by the drummer.

In this initial phase of development, the compositional structure and sonic palette of each improvisation is expanded and shaped by studio production methods.

Subsequent phases of development will focus on: